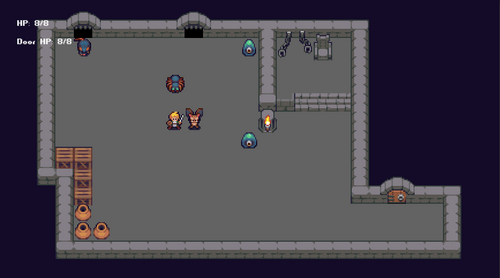 Since a long long time ago I started wanting to create a Roguelike game, and for that, I came up with a bunch of different systems, a turn based system, three different dungeon generation systems, and as I got into the genre and observed what a Roguelike really was, I realized there was no way I could make one without putting a huge amount of effort, I would either have to work long hours or work on a project over an extensive period of time, and that means more than a year.

So my quest started when I started to search for ways I could use just 1 or 2 systems that I really liked from Roguelikes and I really liked the Turn Based System I made in Unity, I wanted to use it for something. I maintain a monthly devlog where you read in more details the thought process until I got to this project - But what matters is the game that I came up with - it is basically a tower defense game, but you have to protect a door, and the enemies work in a spawner system that gets increasingly hard, it's a pretty simple concept that I really liked to develop. It took me around a month of development, and I didn't work everyday and I don't recall ever working more than two hours on a given day (I'm currently taking my Master's, so time for personal projects is not significant).

Paraphrasing what I had in my devlog, here is the concept of the game:

Alright, this is it for this post, this is just a quick initial design post to talk about what the game is, what concerns I had/have and ideas I have to remediate those issues, it is just a form to keep those things documented and better show how my design process is/was.